Now i’m going to pre-face this by saying that this build thread will be nowhere near as exciting as the others on here, mainly because it’s a little Japanese sh*tbox that you can’t really do much to!
So I picked up the car in early 2020 as a 100% stock grocery getter to replace my previous car which wasn’t going to pass it’s MOT due to an insane amount of rust. (Cheers Ford for not undersealing your vehicles from the factory!) 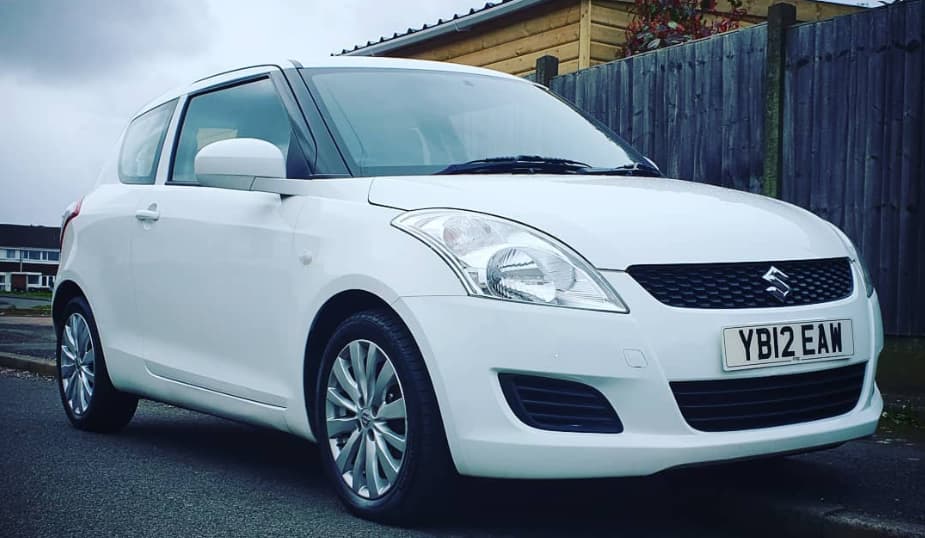 image925×538 51.5 KB
As you can see, it’s pretty uninspiring. Over the next few month I gradually added little bits to it, such as wind deflectors, plastidip on the badges, smoked LED indicator repeaters, etc etc. The usual Halfords specials. One of the first major things I did which changed the look of the car a lot was tint my own windows. I was quite proud of myself at the time as I’d never done anything like this before, and it turned out quite well, especially considering the same tint is still on till this day! 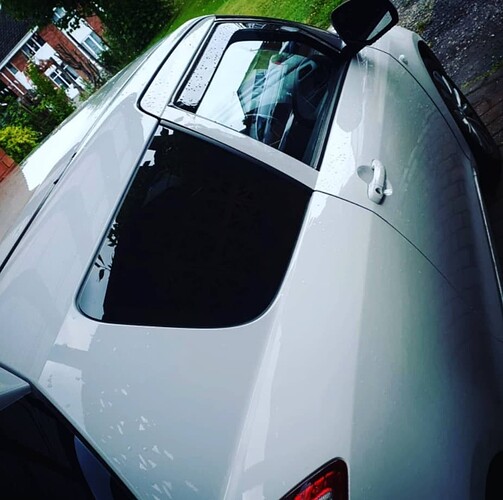 image926×920 61.2 KB
The next few months again were just set about doing small aesthetic touches when I could afford to (I was still working for KFC at this point, so my wages were pretty much non existent).
I’d added a sunstrip, had the front and rear lights tinted, fitted an aftermarket head unit, added a few decals on the rear window as well as doing a kill all wipers wiper delete. 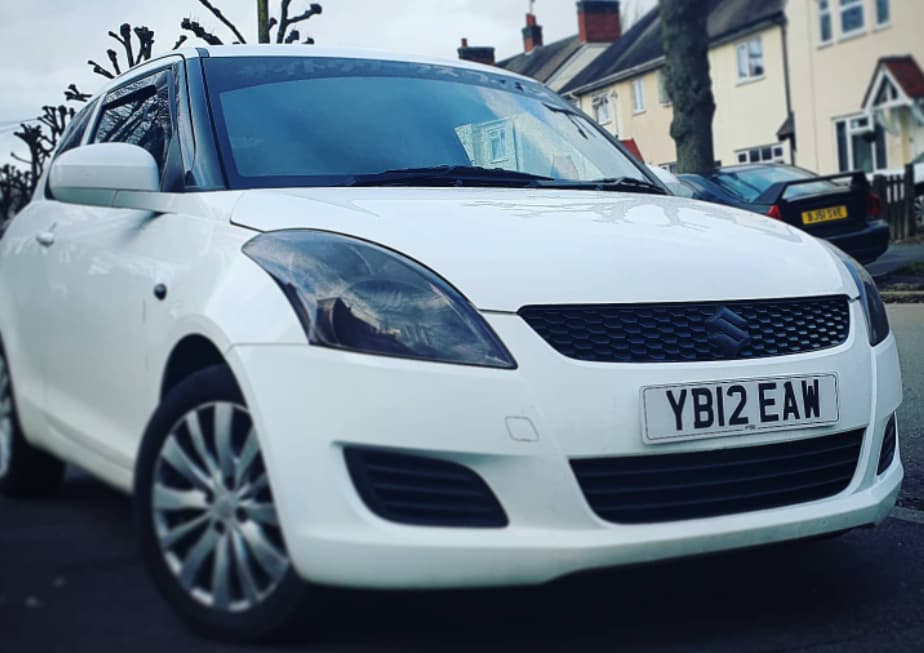 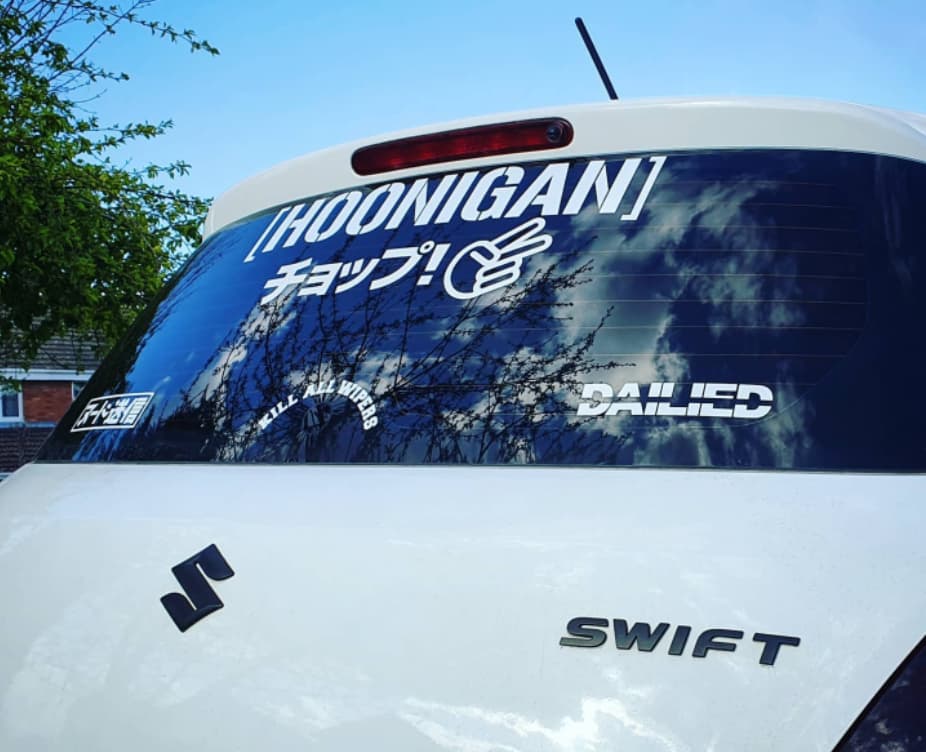 image926×752 64.7 KB
After owning the Swift for about 14 months I decided it was time to start doing some actual modifications to the vehicle. The first thing on the list was to get it lowered, as the stock ride height was ridiculous. For this I got a set of Vmaxx 40mm lowering springs from CTC Performance and got them fitted. 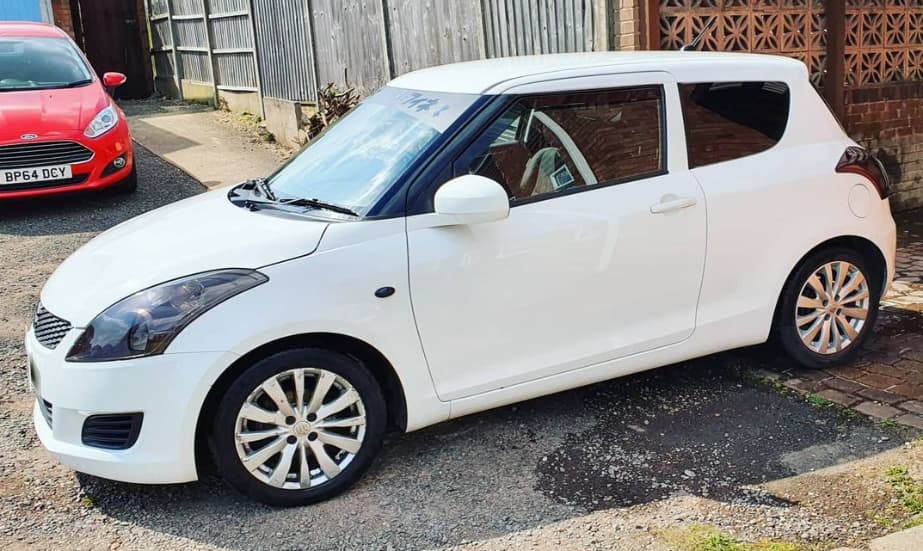 image923×551 83.3 KB
While the ride height was still fairly high compared to some cars, it was a hell of a lot better than the standard height. And with this came the added benefit of better handling, win win right?
Unfortunately shortly after the springs were fitted, the Swift was hit by a lorry when going round an island. Luckily it was only one of the tyres that hit my front offside wing, and only scraped the paint off. 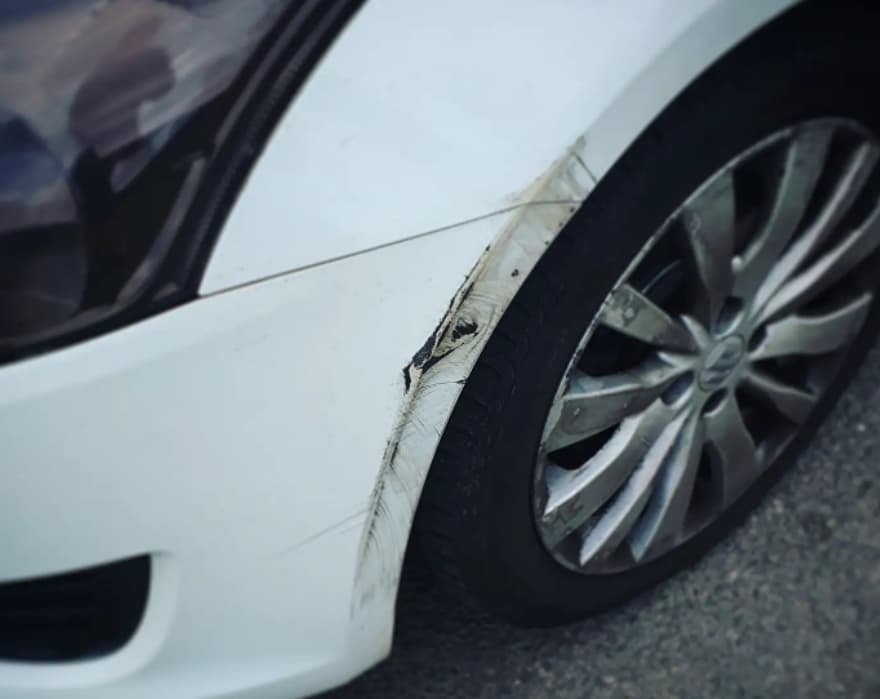 image880×699 30.8 KB
The bad side of this is that you all know how expensive the paint shop can be! So this caused quite a setback in the modifications due to a simple lack of funds.

image887×626 57.9 KB
It did however all get sorted as you can see.
The next small thing I did was add a tow strap to the front of the vehicle, for all that track time I wasn’t going to be doing

I just thought it looked cool and stuck it on the front of the car. 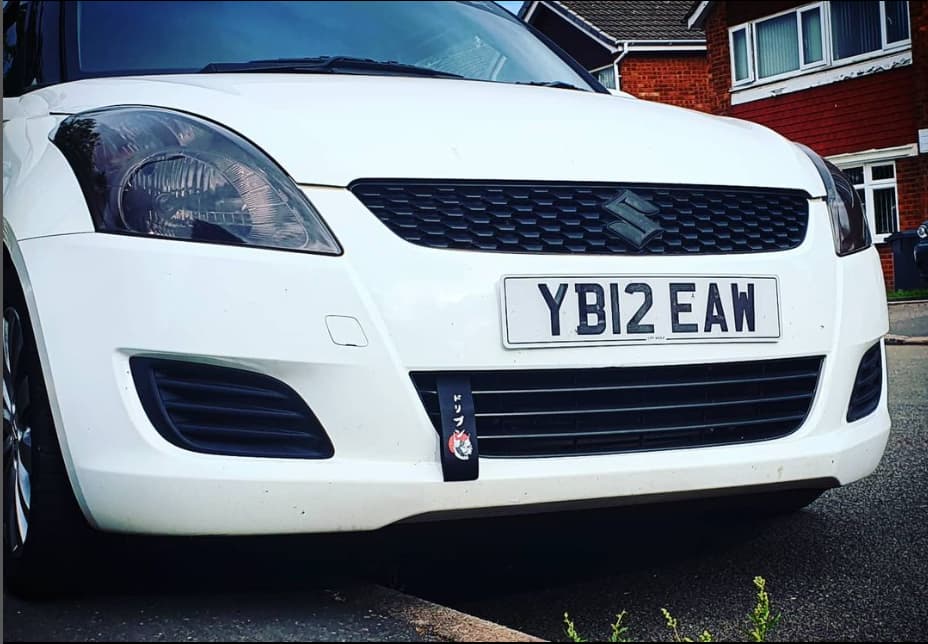 image928×644 66.9 KB
After driving with it like that for a few days, I decided that if I was going to have it on, I might as well do it properly. So I took the front bumper off for the first time, drilled a hole into the front bumper reinforcer than attached the tow strap so it is now fully functional and can pull the car if need be. 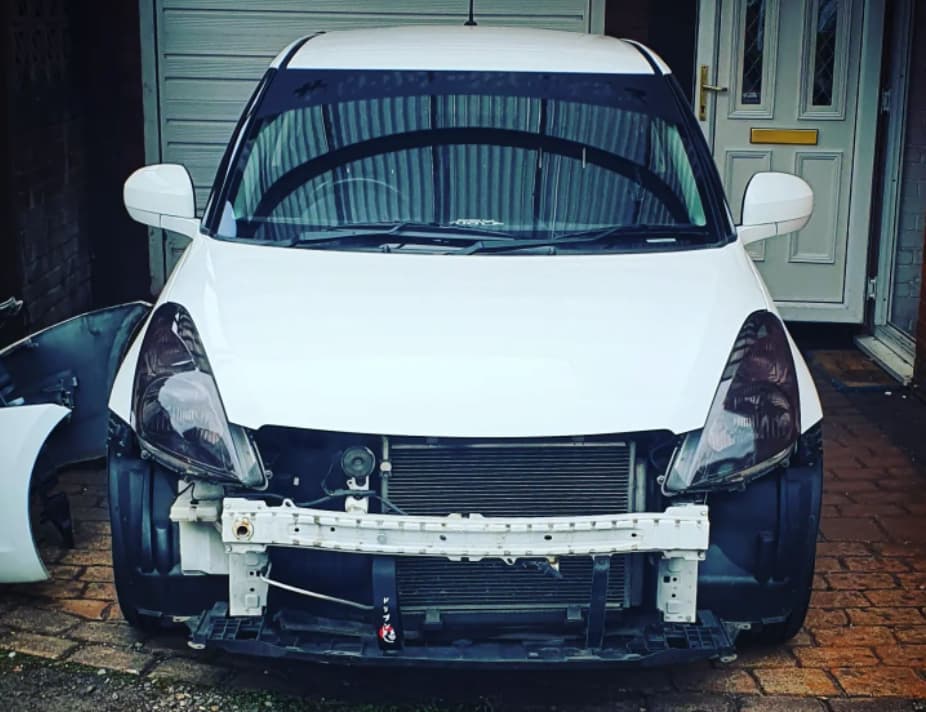 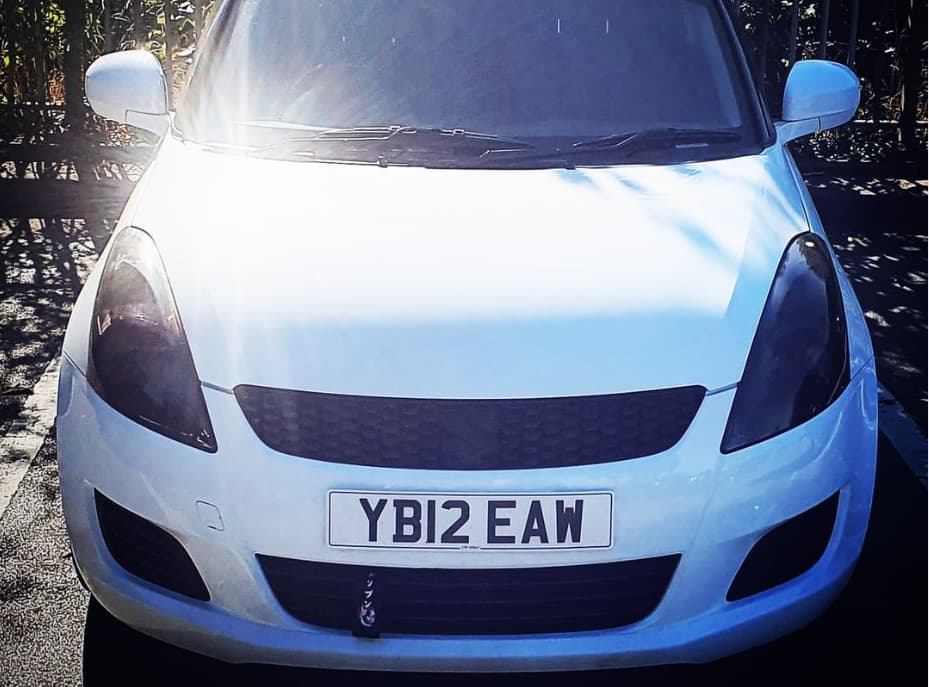 image929×687 65.5 KB
My next modification was to add an ali-express special rear wing. This wing was an absolute bargain at only £90 including shipping, and doesn’t look half bad in my own opinion. It took over two months to arrive from China, but once it came, installation was simple. Just drill two holes in your roof, screw it in place with 3M tape to help keep it down and you’re done! 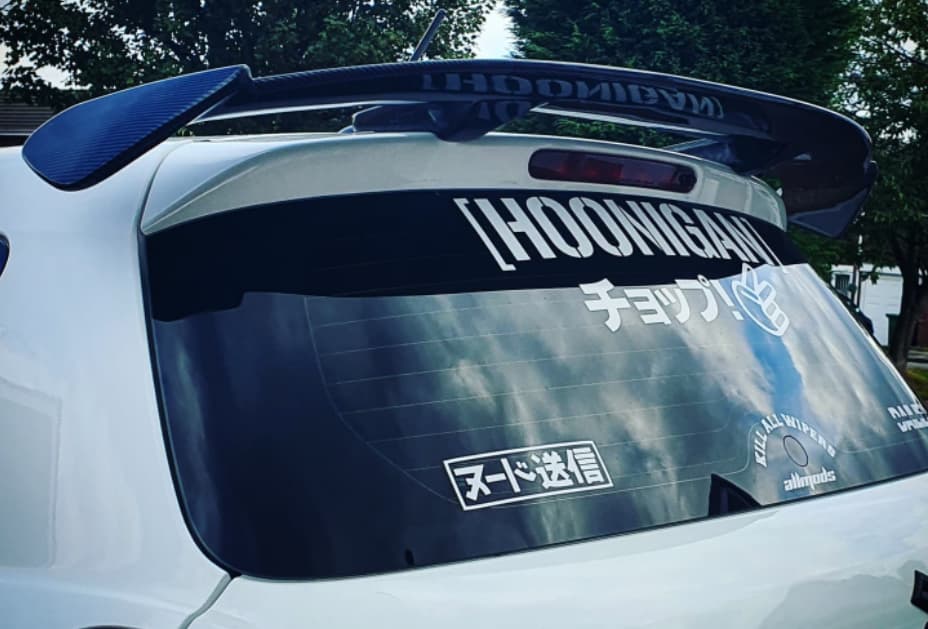 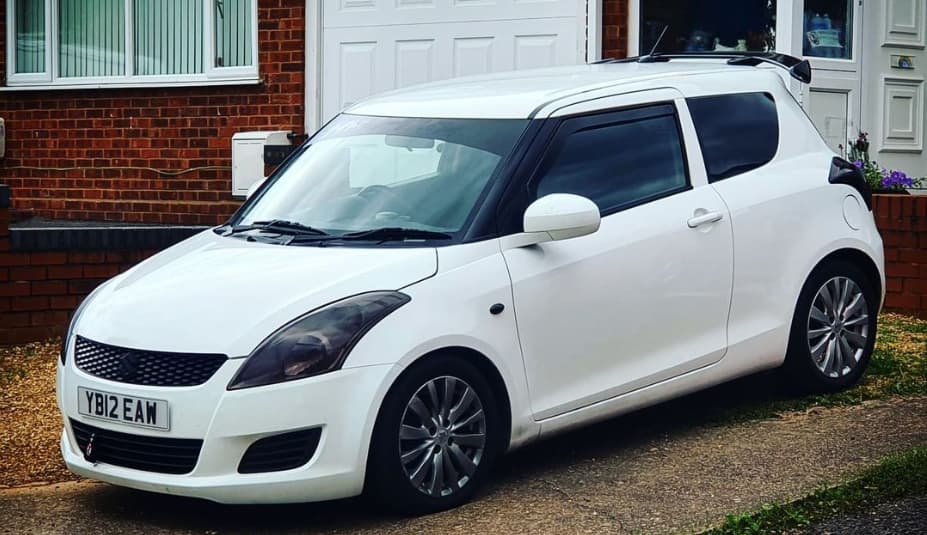 It was shortly after this that I met the Drive-R lads at the Meraki launch event at the Gaydon Motor Museum. If I’m being completely honest, I kinda messed up a bit and parked on their stand by accident without realising it, but it all worked out in the end as I’m here now

image927×353 97.7 KB
This was the first car meet I’d ever been to so I was very shy and didn’t really know the etiquette so I just kept to myself. After the meet I’d gone home to check out all the groups that were there and had noticed that Drive-R had actually photographed my car with theirs and gave the little nugget some attention. This really shocked me as I was certain at that point my Swift wasn’t going to be welcome due to being, well, a nugget. But the Drive-R team made me feel really welcome. 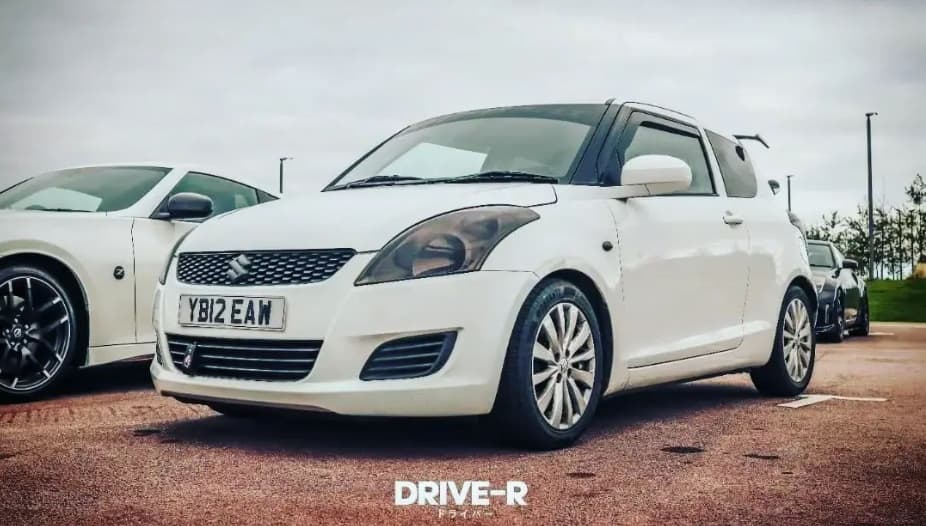 image926×526 57.2 KB
This gave me the motivation to actually continue working on my car and making it as good as it can be with the little budget I had. From there I carried on doing little things such as getting the B-pillars rewrapped as the original owner peeled the trim off, while I saved up for bigger things.

image924×407 80.9 KB
In early 2022 I finally got round to doing the first “performance” modification, a custom rear backbox delete made by Rebel Classics. 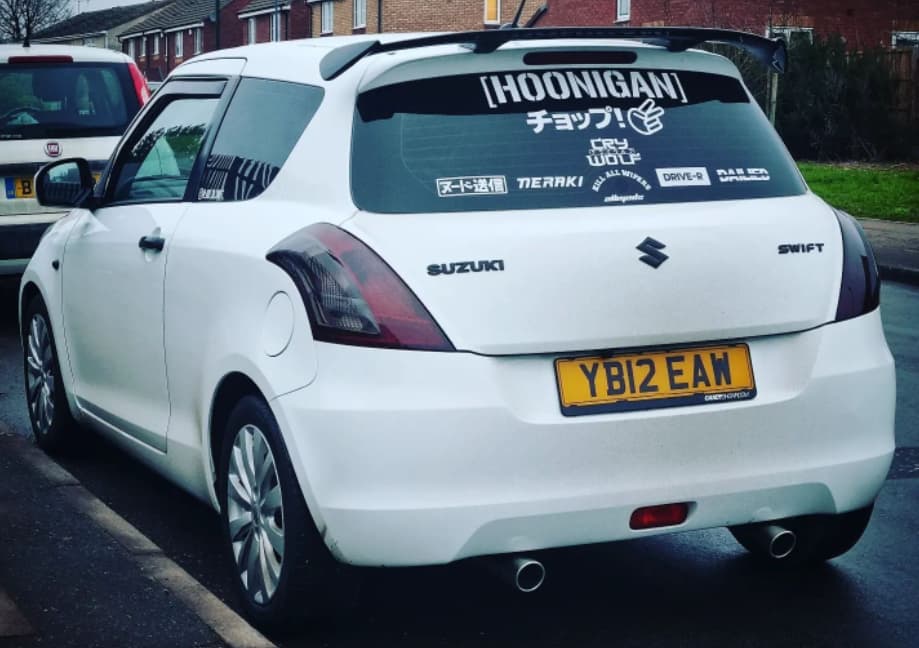 image919×648 55.9 KB
This drastically changed the sound of the little Swift and allowed it to breathe just a little better in the high rev range, giving me a bit more moving power when mashing the pedal. Not much more mind you, and I’m fairly sure it might just be a placebo, however the butt dyno feels it! It certainly makes the car a lot more fun to drive, and that’s the main thing right?
I then decided to have a go at making a custom grille for the front, and it went terribly! 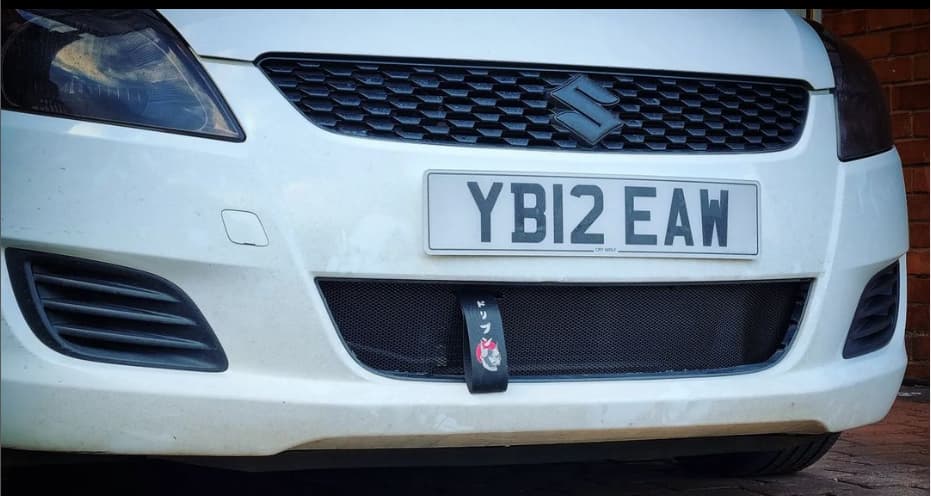 image931×496 47.6 KB
As you can see, it looks rather messy up close, but from a distance it actually looks quite cool. I’m 100% in the future going to attempt to make a V2 of this but make it look professional (or at least attempt to!)
The next mod done to the lil Swift was a big one, one I’d wanted to do since I first bought the car, something that really sets a modified car apart from a stock model. Aftermarket alloys!
I decided on a set of Japan Racing JR3’s, 17x7J (Compared to the standard 16x5.5J), paired with a set of Toyo Proxes TR1 tyres 205/17/40 (stock was 185/16/55). 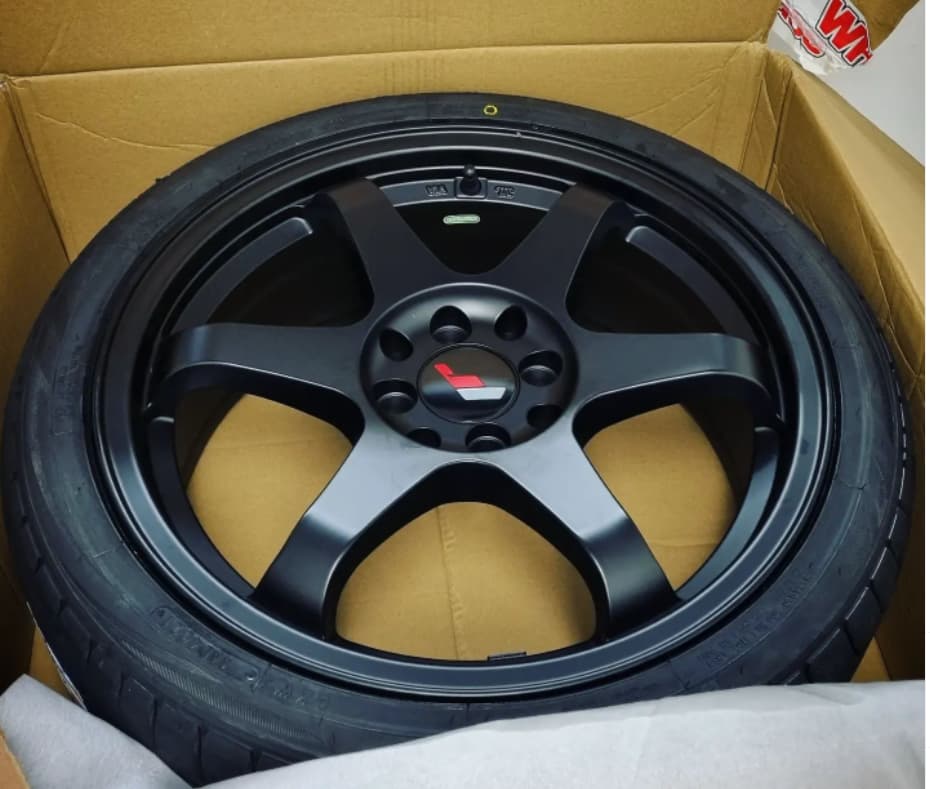 image930×789 62.5 KB
Can honestly say these completely transformed the look and feel of the car. I wish I’d done it a lot sooner, and can honestly say it should be the first thing any car enthusiast should do to their vehicle. Get yourself a nice pair of good quality tyres before you do any other modifications. No they aren’t as cool as a big turbo or a chassis mounted wing, but they will do more than any other modification for your handling and performance. 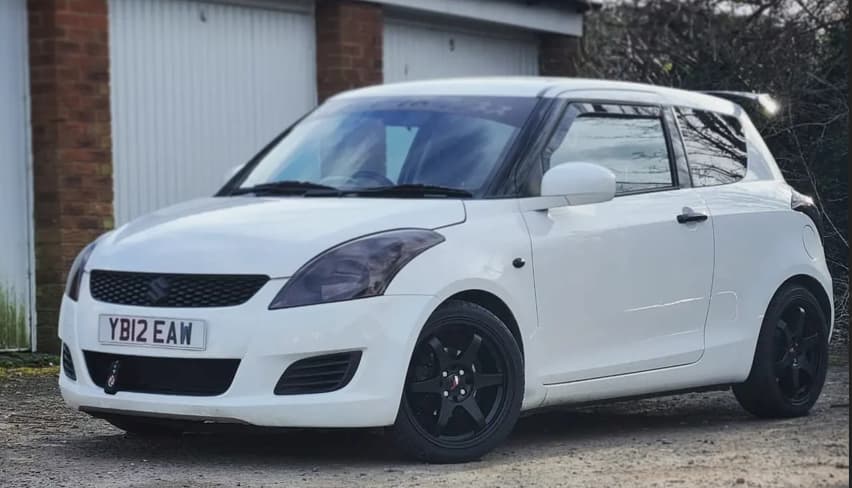 image852×488 41.7 KB
How much better does it look with those alloys? The fitment is almost perfect (just need to go lower!) and they look so much more aggressive than the stock alloys.

Since then not much has been changed (Due to being broke from buying alloys!) but there’s a lot more in the pipeline. Hopefully soon I’m going to throw a wod of cash at Balveen to make me an air intake, throw more wods of cash at Scott to do me some “Drive-R” stripes, get a splitter installed, hopefully get some sport side skirt’s, potentially get a rear diffuser made, potentially go to bigger exhaust tips that aren’t chrome, custom front grilles, wheel bolt to nut conversion so I can get some sick lug nuts, the list goes on and on! 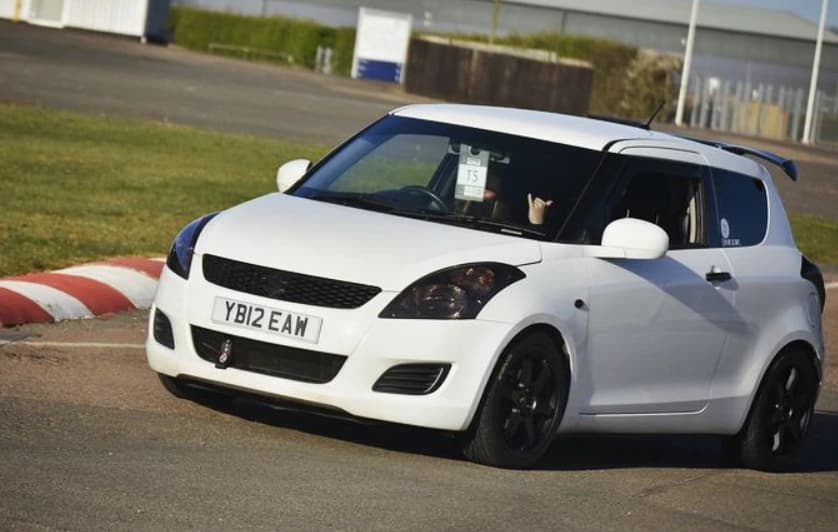 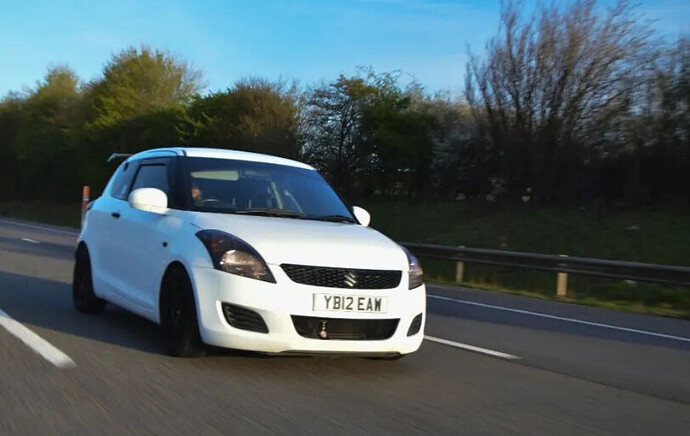 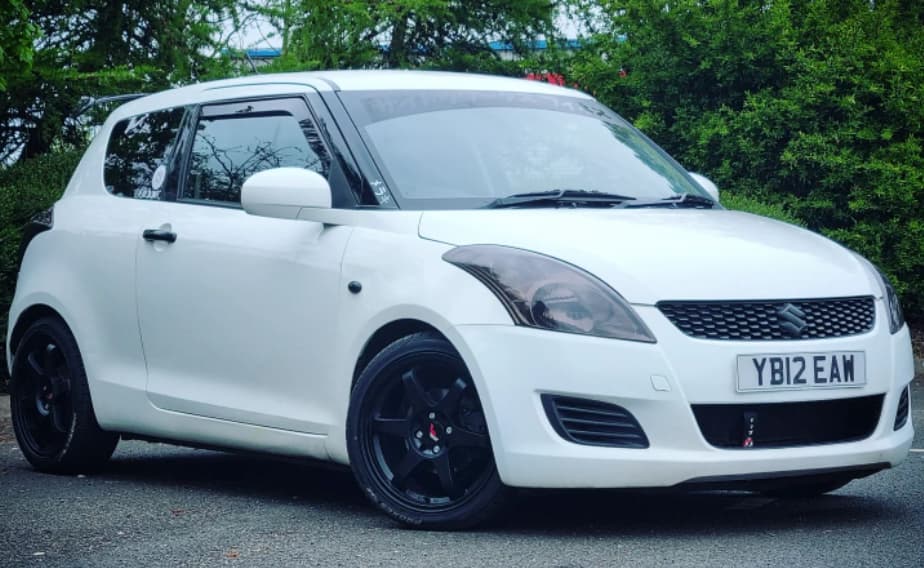 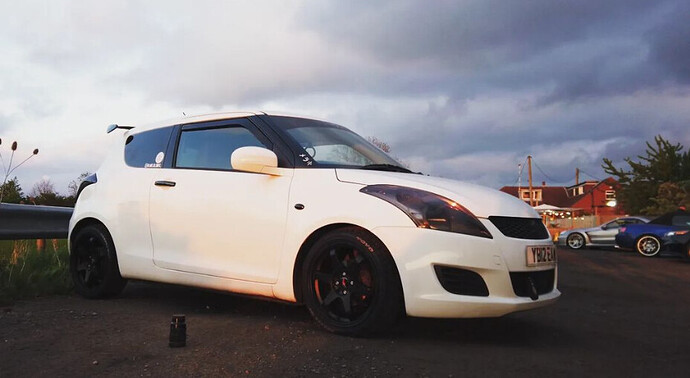 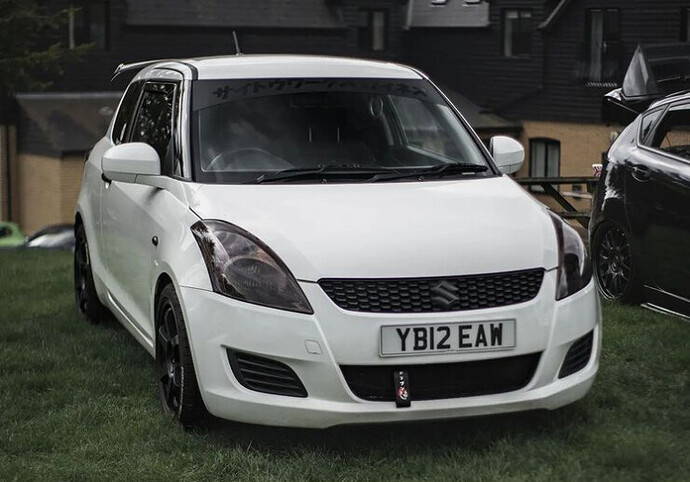 While the build may only be in it’s infancy, and only be a lil sh*tbox, the most important thing is that you’re having fun. Take this lil nugget as proof that you don’t need a 500bhp sports car on bags with a rocket bunny kit and 3 piece custom alloys to be accepted into the car community. The guy’s at Drive-R have taken me in with open arms and shown me that every build is valid. You don’t need a huge budget to make something cool, just be passionate with what you do and it’ll show in the end product. Don’t be afraid to get started!

Great post @Not_So_Swift! Loving the build so far, and what a difference the alloys made!

Glad you’re enjoying being part of the community and it’s a pleasure to have you with us! Looking forward to reading more updates in the future!